Tippecanoe County, Indiana — At first, launching a new technology-driven initiative during the early days of the unfolding COVID-19 pandemic might not have seemed like the right time. But hindsight proved timing is everything—and with the ongoing opioid crisis, there wasn’t another moment to lose.

Instead, the pandemic revealed a dire need for a groundbreaking, real-time approach to care coordination, including for those incarcerated and struggling with opioid addiction. Disparate community groups who once worked in silos but with overlapping challenges in addressing the opioid crisis are now coming together under one virtual roof to more effectively face a shared problem head-on.

With community partners across Tippecanoe County in Indiana, HealthCall is helping launch a transformative scheduling software application that expedites treatment for individuals incarcerated at the county’s corrections facilities for opioid abuse. The goal is to reduce the amount of time in jail and instead, get people into treatment to better mitigate the risks of possible relapse and reincarceration.

Working with Nicole Adams, PhD, RN, a Clinical Professor in Nursing and Researcher at Purdue University, as well as with leadership and case managers at the Tippecanoe County Corrections Department, and providers across the county including Valley Oaks Health, HealthCall created a shared, online dashboard that connects all of these community groups. Connected to HealthCall’s behavioral health platform, this collaborative online approach begins with a corrections officer who initiates treatment for an incarcerated individual, and takes a community-wide approach to guiding the user out of the prison system and into rehabilitation.

Adams joined what began as the Tippecanoe County Opioid Task Force, and was then renamed the Recovery and Resilience Network, which helped spearhead this effort.  She saw from the frontlines of the opioid epidemic that it wasn’t a lack of treatment that was the problem, but a lack of process and policy. When someone was arrested for opioid use, the current system, being too slow and unwieldy, failed to capitalize on that individual’s rock-bottom moment to seek help and treatment. Creating an impact in the opioid epidemic required creating changes to the system, and getting people into treatment—much faster. This boiled down to coordinated scheduling.

“It was good to have this ready pre-pandemic to get our feet wet before the flood,” Adams said. “We know it’s there, we now understand the software. What makes this totally unique is that it brings all these different groups together into this system without them giving up their autonomy. They still have control over their own schedules and environments but this application gives community groups power while at the same time provides a mechanism to make care delivery easier. The patient benefits, the different organizations benefit, the community benefits.” 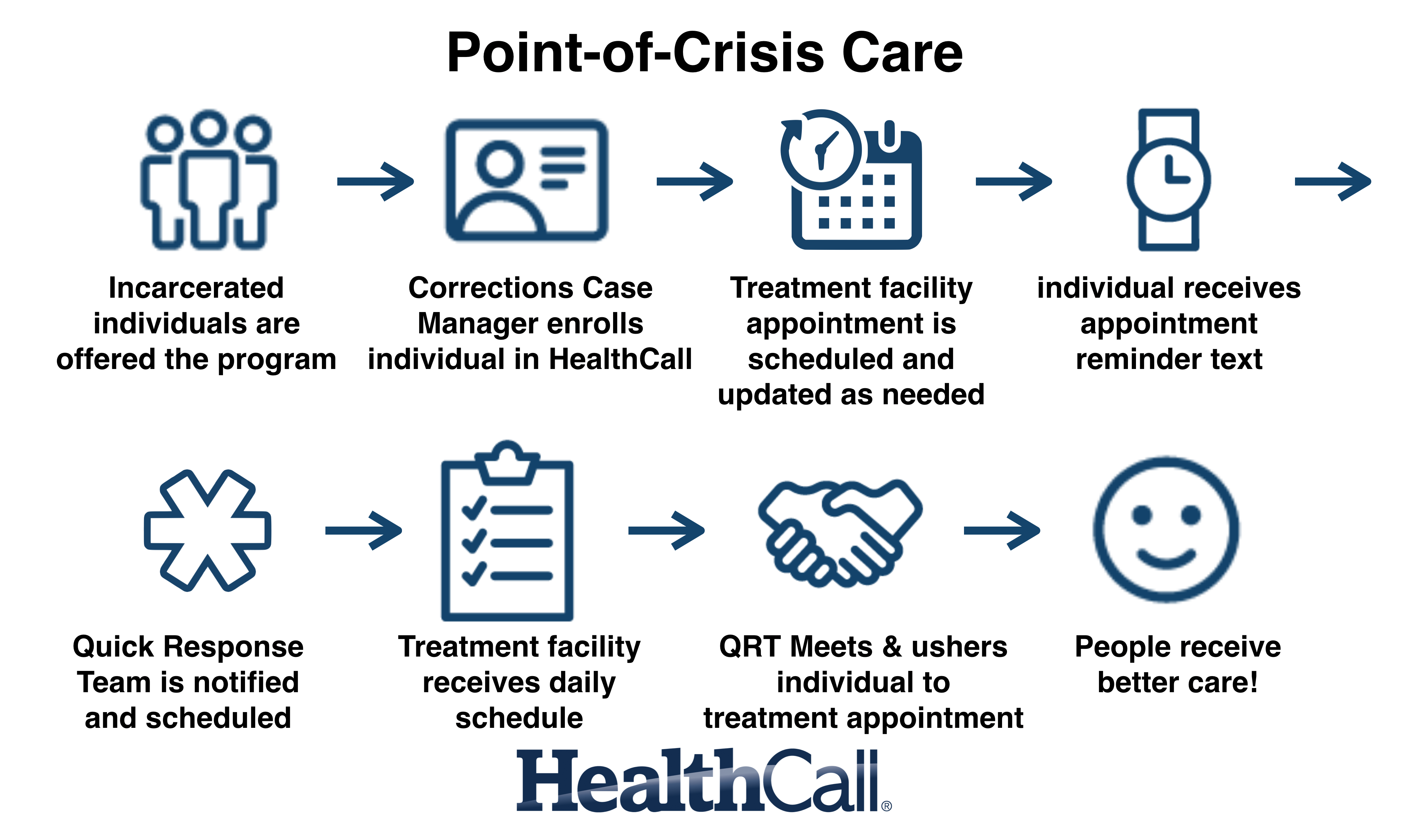 Corrections Case Managers log into the Point of Crisis Care program developed by HealthCall to directly schedule appointments for individuals at area treatment facilities such as Valley Oaks Health, and then update appointments as needed. The HealthCall system confirms the appointment with the individual and connects directly with Quick Response Team (QRT) members as part of the peer recovery plan so that patients don’t fall through the cracks. Barriers such as having transportation to treatment appointments are addressed right from the start, and everyone involved receives automated appointment reminders. Providers receive notifications of bookings right away, and QRT peer support team receives referrals to provide peer-to-peer support, such as getting the incarcerated individual to the appointment, talking to them about their own experiences with drug use, making the patient feel less alone in the process.

Gone are the days of handing a pamphlet to someone arrested for substance abuse or corrections officers cold calling treatment centers—which could be difficult if the incarcerated was brought in after regular business hours or on weekends—and being placed on months-long wait lists for appointments. The burden of showing up for treatment has been lifted from the incarcerated and is now in the hands of a care team.

“It shifts the corrections environment from being less punitive to more rehabilitative, while streamlining the process,” said Jason Huber, executive director of Tippecanoe County Community Corrections. “Before HealthCall, it was a very cumbersome process to get individuals brought into the justice system connected, get them to the right places for help. We had a Rolodex of service providers who we’d pick up the phone and call, then it’s scheduling, what about this date, what about this time, trying to coordinate was a very clunky process and people relapse and we have repeat offenders. We decided on this new approach just as COVID was hitting, not realizing at the time what the capabilities of this program could be, but the pandemic highlights the need for this kind of proactive scheduling system.”

“It shifts the corrections environment from being less punitive to more rehabilitative, while streamlining the process”

Last spring, as COVID spread across the nation and emergency responders and hospital workers were scrambling to keep up, officers at the Tippecanoe County Corrections Department decided to try HealthCall’s new scheduling application when incarcerations had slowed.

“We had a homeless man come in, he was incarcerated and during a pre-trial assessment, we realized he had significant substance and mental health issues,” said Kenya Everett, a case manager and Comprehensive Opioid Abuse Program (COAP) Coordinator at Tippecanoe County Corrections Department. “He had overdosed a few months prior. Using HealthCall, we got him scheduled into treatment in 24 hours, which he completed. The first 24 hours is everything. That’s when people are motivated to change their behaviors that could lead them back to prison.”

The first 24 hours is the most opportune time when incarcerated individuals struggling with opioid use are most motivated to break destructive patterns, which is why HealthCall’s quick, real-time scheduling application has a meaningful impact. While complete community outcome data is not yet available, national data about the growing need for quick response is: according to the Centers for Disease Control and Prevention, in 2018, two out of three drug overdose deaths involved an opioid. In 2018, overdoses involving opioids have killed approximately 47,000 people, with one-third of those deaths involving prescription opioids.

Spring shutdowns put into place as COVID-19 cases rose meant fewer arrests, but those in the trenches anticipated a second wave: the mental health and substance abuse struggles that often accompany trauma and disruption. Everett echoes that sentiment.

“We started out with two appointments per week, but then things began to reopen, we now have seven appointments per week,” said Everett. “It’s slowly increasing. Eventually, we’re going to run into the problem that service providers won’t be able to keep up with us. Our case managers are already receiving requests to place not-incarcerated individuals into these services.”

The flood Dr. Adams referred to is happening, with the COVID-19 crisis already driving up mental health and substance abuse problems. Tippecanoe County, home to Purdue, had 42 drug overdose deaths in 2018, of which 34 were opioid-related. Nationwide, the CDC reported 83,500 drug overdose deaths in the year ending in July 2020, the highest number of overdose deaths ever recorded. On Dec. 17, 2020 the CDC issued an emergency health advisory alerting public health workers to the acceleration of overdose fatalities in lockstep with widespread shutdowns. “This represents a worsening of the drug overdose epidemic in the United States,” the CDC stated. “The disruption to daily life due to the COVID-19 pandemic has hit those with substance abuse disorder hard,” CDC Director Robert Redfield, M.D. said in a statement issued December 2020.

Given what’s unfolding, Adams said the uses for HealthCall’s scheduling software are limitless. “I’d like to see us add hospital emergency departments to this and other providers,” she said. “If someone comes into the ER at 2 AM on a Tuesday with an opioid overdose, ideally, we’d like to see that person discharged with an appointment for treatment. No more gaps. HealthCall’s platform facilitates a level of community connectedness that we were already building but this takes it to a whole new level of care.”

Adams said she and her colleagues expect to start pulling county outcome data to gauge how effectively the scheduling application has been in improving access to opioid treatment.

Huber said he anticipates not only better quality of care but possibly substantial cost savings. However, it’s challenging to put a dollar figure on the bigger picture.

“It’s such common sense, yet it’s so new,” he said. “You get an incarcerated person out of prison and into treatment right away, yes, you save on the monetary costs in terms of jail time, housing, going through the court system. Also, you prevent the loss of income, by avoiding incarceration they are less likely to lose their job. You see benefits in the way of child care, productivity and overall quality of life. This scheduling application is part of a large, complicated web in terms of all that it touches. You keep people out of jail and get them into treatment, you change that whole equation.”

“You get an incarcerated person out of prison and into treatment right away, yes, you save on the monetary costs in terms of jail time, housing, going through the court system…”
Jason Huber

Download Article
We use cookies on our website to give you the most relevant experience by remembering your preferences and repeat visits. By clicking “Accept All”, you consent to the use of ALL the cookies. However, you may visit "Cookie Settings" to provide a controlled consent.
Cookie SettingsAccept All
Manage consent

This website uses cookies to improve your experience while you navigate through the website. Out of these, the cookies that are categorized as necessary are stored on your browser as they are essential for the working of basic functionalities of the website. We also use third-party cookies that help us analyze and understand how you use this website. These cookies will be stored in your browser only with your consent. You also have the option to opt-out of these cookies. But opting out of some of these cookies may affect your browsing experience.
Necessary Always Enabled
Necessary cookies are absolutely essential for the website to function properly. These cookies ensure basic functionalities and security features of the website, anonymously.
Functional
Functional cookies help to perform certain functionalities like sharing the content of the website on social media platforms, collect feedbacks, and other third-party features.
Performance
Performance cookies are used to understand and analyze the key performance indexes of the website which helps in delivering a better user experience for the visitors.
Analytics
Analytical cookies are used to understand how visitors interact with the website. These cookies help provide information on metrics the number of visitors, bounce rate, traffic source, etc.
Advertisement
Advertisement cookies are used to provide visitors with relevant ads and marketing campaigns. These cookies track visitors across websites and collect information to provide customized ads.
Others
Other uncategorized cookies are those that are being analyzed and have not been classified into a category as yet.
SAVE & ACCEPT